How every diver can help with shark conservation.

Home / Blog about diving with Great White Sharks at Guadalupe Island and Ocean conservation, by Shark Diver. / Ian Campbell. wwf / How every diver can help with shark conservation.

Bull sharks in Fiji
Conservation done right. BAD is good!
I have to share DaSharks latest blog. It is actually a guest blog by Ian Campbell that talks about protecting sharks and how you can help.

Shark research, management & conservation intelligentsia meeting in Townsville, see below
Introduction by DaSharks:
Are you intrigued? :)
Here goes.
Ian Campbell is currently working for WWF’s Global Shark and Ray Initiative running the sustainable management component. He is also a Shark diver and a member of the SRMR management team.
From NGOs to the public and private sector, Ian has over 20 years’ experience in fisheries policy, ecology and fishery management working extensively within both the UK and internationally. Previous employment has included overseeing the reform of the EU’s Common Fisheries Policy for the Pew Charitable Trusts, fisheries observer on blue-fin tuna vessels, inshore fisheries management and as a commercial diver in the offshore sector.
Ian holds a Bachelor’s degree in Applied Marine Biology from Heriot-Watt University and a Master degree in Environmental Science from the University of Strathclyde.
This is an important initiative.
Having just returned from a meeting with major stakeholders, see at top, I've asked him whether he wouldn't mind submitting a guest post presenting it to the wider public.
Here is Ian's post.
Shark divers – An underused resource?
Everyone who is even remotely interested in sharks (and rays, don’t forget these charismatic shark pancakes of wonder) is abundantly aware of the pressures they are facing.
Fishing pressure, habitat loss, unsustainable consumption, or even fanciful claims of being “evolved for extinction” everywhere you look they are under the cosh. The pressure that sharks are under have probably best been summed up by the 2014 paper (and here - notice the part about research and data collection?) led by the IUCN Shark Specialist Group which concludes that almost a quarter of all sharks and rays (over 1,000 species assessed) are faced with the very real threat of extinction. Remember, this is not the claims of an environmental NGO, but an independent assessment of the current state of shark and ray populations by 128 experts from 35 different countries. Here’s a simple chart highlighting the different levels of threat. 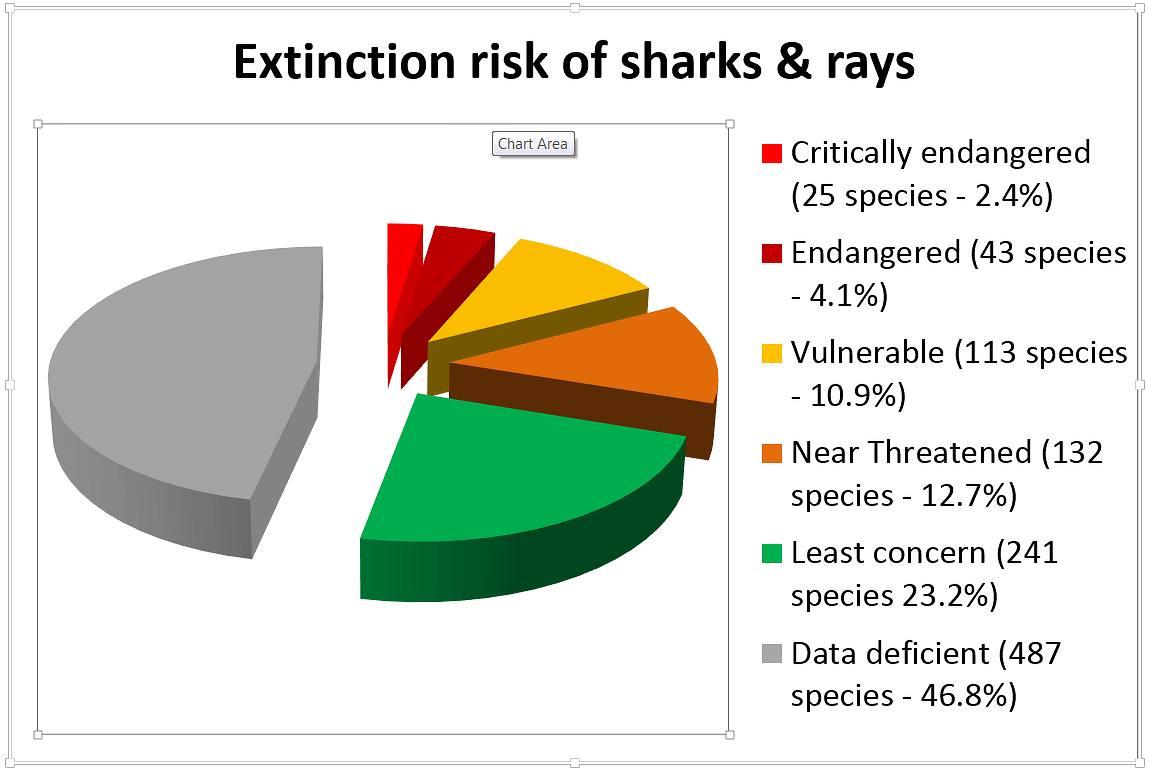 About Shark Diver. As a global leader in commercial shark diving and conservation initiatives Shark Diver has spent the past decade engaged for sharks around the world. Our blog highlights all aspects of both of these dynamic and shifting worlds. You can reach us directly at staff@sharkdiver.com.
diving with sharksshark conservationshark diverShark diving
17
Apr 2015
By Shark DiverIan Campbell. wwf, UncategorizedComments Off on How every diver can help with shark conservation.