This is the 4th year Shark Diver is going to Fiji to dive with Bull Sharks at Beqa Shark Reef Marine Reserve. In the last 3 years, we have been diving with more than 70 Bull Sharks at a time, with Black Tip-, White Tip-, Grey Reef-, Nurse- and Lemon-Sh…

With the holidays fast approaching, what are you going to give the person who has everything? Here is an idea. Sponsor, or name a shark at Guadalupe Island and support the research and conservation efforts there.The Marine Conservation Science Institut…

I booked the trip to Isla Guadalupe (Guadalupe Island) with Shark Diver of San Diego to fulfill a long held desire – since reading Jacques-Yves Cousteau’s “The Shark” and meeting his son in San Diego when I was a boy. And, in every way possible, this trip exceeded my expectations owing to the efforts of an outstanding Shark Diver team (particularly Martin Graf and Cindy Michaels), the Guest Marine Researcher Nicole Nasby Lucas, a fantastic Horizon crew, and great group of fellow shark divers. This is a must do in my opinion for anyone with a passion, interest or bucket list item relating to Great White Sharks – it’s fun, safe and amazing. Many details follow.

The Main Event:
I don’t want to bury the lead, so I’ll get right to our guests of honor. The Great White Sharks are impressive, majestic, and beautiful. They move by the twin cages, quite closely, at a stately pace, and look at the folks in the cage with large deep blue eyes; and, they appear utterly calm and in command. They make passes at the two bait carcasses off the stern, sometimes lazily and on occasion quite quickly. We were fortunate enough to witness a breach on one occasion – a male, who had previously made half-hearted passes at the bait, disappeared, the emerged from deep below the boat, under the cages, at speed, and hit the bait vertically from below, taking himself halfway out of the water – to the astonishment, screams and overwhelming joy of everyone aboard. 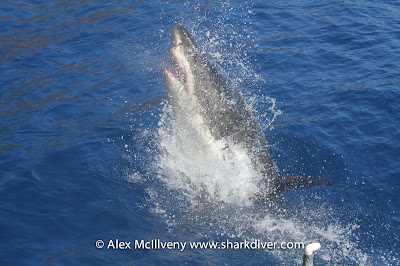 The visibility, typically, is very good at Isla Guadalupe, so the sun penetrates deep into the water and the boat casts a long shadow into the depths. Often our first sightings each time into the cage(s) were of the dark silhouette emerging from the shadow cast by the boat, coming up slowly from below and then circling the cages, bait and boat for some time before silently disappearing into the shadows again. Though each of us kept eyes peeled in all directions, it was amazing how frequently we were taken by surprise by a shark suddenly appearing. On deck, between dives, the crew is very experienced and keen eyed; and, they will call out “White Shark” as they approach, usually well before any guests see them. From above or below it is mesmerizing, and difficult to turn away. 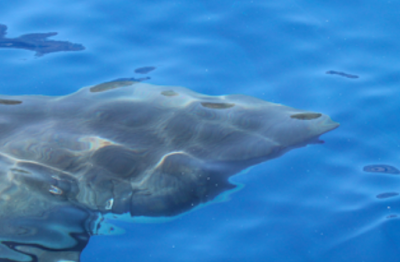 Isla Guadalupe:
There are a few places worldwide to see Great White Sharks with predictability. Both South Africa and the Farallon Islands offer this opportunity; but, both have limited underwater visibility and challenging water temperatures. Isla Guadalupe has better water clarity, 100 foot visibility, and weather, and very few (we saw only three other) boats, some distance away. Unlike other locations, Isla Guadalupe will not force you to deal with cold and murky water, crowded boats and cages, quick “in and out” quick thrill experiences, etc. You will have days on the dive site, in relatively warm and very clear water, and good weather.

Isla Guadalupe is a designated Bio Sphere, a marine sanctuary. It sits about 200 miles southwest of San Diego. It is made up of volcanic remnants and has a stark beauty, with tall, steep cliffs diving hundreds of feet down to sea. There are large populations of, and rookeries for, elephant seals, sea lions – all of which you are very likely to see, with approaches to boat on occasion.

Timing:
Typically, though as Martin notes there are no hard and fast rules with White Sharks, they tell us the males will show up in earlier months – e.g., July, August, and September – and in greater numbers. And the typically October and November are when they have female sightings – the females being fewer but much larger than the males. Also, typically, the wetter weather comes later in the year, with the Pacific hurricane / wet season; but, this too is not always the case.

The Drive Out:
It is a long trip out to, and back from Isla Guadalupe from / to San Diego. It was some eight hours from San Diego to Ensenada Mexico, where we docked to have passports checked, and then a long 18 +/- hours to Isla Guadalupe. Note that the return trip is the same itinerary, in reverse, with a stop in Ensenada before entering U.S. waters. Along the way out to Guadalupe, a large pod of dolphins escorted us. The sea can often be a bit rough to quite rough, with good swells causing a fair bit of roll onboard. Owing to timing, much of the initial leg is spent hanging out in main cabin getting to know fellow divers, with folks eventually heading to their beds – sleep and good anti motion sickness remedies work well. Most folks used some combination of ear patch and oral medication. It’s a long drive, so be smart and just bring your meds. 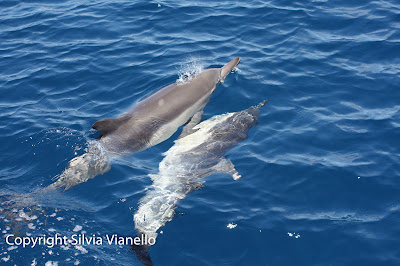 The Boat:
You won’t “Need bigger boat”  The MV Horizon the Horizon is roughly 80 feet long with 8 state rooms and several bunks. There are two restrooms and showers that are shared by all. The accommodations (two persons to a room with curtain for privacy and in bunks) are not lux, but they are nice, and you won’t care anyway  The Horizon is used only as diving vessel; and that’s all season long. They determine who bunks together once everyone arrives in San Diego, based on number of couples, individual travelers, etc. The sleeping quarters are below,, and the main cabin contains the galley and a series of booths along each side used for dining and spending time together with travelers in route or between dives. Net / net, this is a large and comfortable boat. 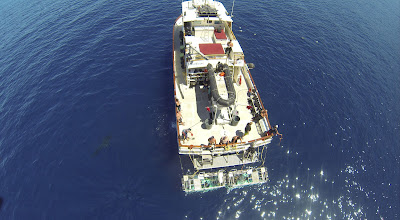 The Cages:
There are two, kept on deck astern for the trip and each night when diving is completed. For each day’s diving, each is suspended off, but affixed to, the stern at the surface (that is, they do not sink below) – so you simply climb down a ladder and into the cage (easy); and each easily holds four divers. One cage is aft port, one aft starboard. You will alternate each dive, so that everyone has plenty of time in each cage. 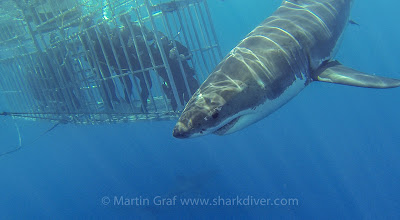 The Dives:
The divers are assigned to two teams. Each team dives for an hour, and then rests and re-hydrates for an hour while the alternate team dives. Each team has four people in each cage, and the team alternates cages each time, so everyone gets to try both cages and gets plenty of dive time and rest. There were a couple days of early open diving as well – starting just after sunrise – during which anyone who preferred could climb into either cage. 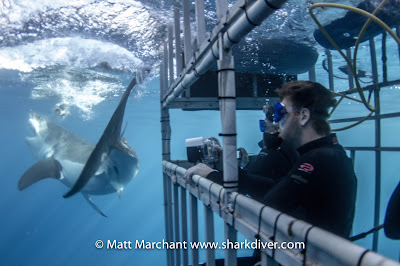 The crew will size you for suits, equipment, weights, and Martin himself oriented each of us to breathing via air hose and made sure we comfortable before we stepped fully down into the cage.
Safety is primary and at no point was anything but utterly assured all was well and well in control. No divers are ever permitted out of the cages – for the sake of the sharks, the marine preserve, as well as the divers. You are completely safe at all times. There were folks of all ages, bith genders, and widely varying experience levels. Past trips have included folks in their 60’s and 70’s, and quite young divers as well. The always amazing Cindy at Shark Diver can advise on particulars.

Breathing with the hookah system is easy – no metal tanks to strap on, simply a long hose that goes from on deck tank system to each diver’s regulator (mouthpiece through which you breathe). So, if you’ve ever snorkeled and used a mask, you’ll be just fine. The cages are beyond sturdy, offer complete visibility around, above and below, and are plenty large enough for each set of divers. 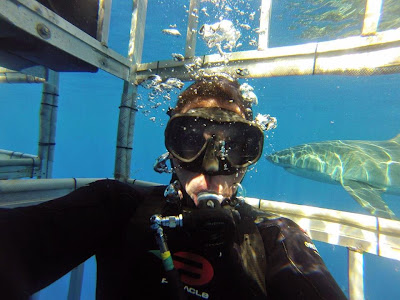 The Purpose:
In addition to the opportunity provided to guests to see these amazing creatures, each shark observed is photographed (Martin, Nicole and the divers get to participate in this) and compared to a database of previously observed sharks. New sharks are named and tracked in the database each successive year. This is a joint effort between the Marine Conservation Science Institute (MCSI) and Shark Diver.

Newly identified sharks on a particular dive are named by the people on the dive in a bidding process (proceeds of which go to the MCSI and shark research effort). On a side note, I was fortunate enough from a 2014 dive with Shark Diver to name one – Hooper (after the Richard Dreyfuss oceanographer character in Jaws) – great fun and a great way to support the cause.

Isla Guadalupe is home to a marine preserve and a research station manned by a researcher named Mauricio – who will visit the Horizon and give an excellent presentation with Martin on Great White Sharks and the Isla Guadalupe Bio Sphere.

The Shark Diver Team:
Martin Graf, the CEO and dive leader, teacher, host is a deeply experienced and great guy. He is hands on, overseeing everything on the dives. He also gives talks and a presentation to the divers on Isla Guadalupe, Great White Sharks, and many experiences with both. If Nicole Nasby Lucas (again, researcher from MCSI) is leading Science Expedition, she, too, will give a fine presentation, talk. Both Martin and Nicole worked each evening on identified sharks seen from photographs taken during the day. All the reservations, logistics, arrangements, and care taking of the divers before and after is led by the excellent and omnipresent Cindy Michaels, their Director of Communications – Cindy was a rock star and took care of every question and need leading up to the trip.

The Horizon Crew:
In a word, excellent. Experienced captain, crew – professional, easy going, genuinely friendly, and they take care of anything you might need. I cannot say enough good things about the crew of the Horizon.

The Food:
As noted elsewhere, the food is outstanding. The quality and quantity of the meals is positively surprising and uniformly excellent. There is also beer and wine aboard. There are large and delicious breakfasts every morning cooked to order, excellent lunches (including Sashimi), and absolutely fantastic dinners, including prime rib near end of stay. The galley will account for you preferences and restrictions with no problem.

Thank you David Moore! We appreciate you taking the time to share your experience with us and our future divers. We are glad you enjoyed your expedition and hope to see you again on another shark trip.

03
Dec 2015
By Shark DiverNicole Lucas-Nasby, swimming with sharks, UncategorizedComments Off on Science Expedition to Guadalupe Island