How to conquer fear of sharks? Break the law?

Home / Blog about diving with Great White Sharks at Guadalupe Island and Ocean conservation, by Shark Diver. / illegal shark diving / How to conquer fear of sharks? Break the law?

Shark conservation at it’s best!
Do sharks feel pain?
Frightened of the water? Go swimming with great whites. that is the heading of an article in the "Telegraph", published a couple of days ago.

Catchy phrase! So is this article really about conquering the fear of sharks? Well, I don't think so. The article is really about Jean Marie Ghislain, one of the guys we have written about here when we talked about the out of cage diving that is going on at Guadalupe Island on various occasions. We all know that it is illegal to do so and, if anything were to happen on those dives, could threaten all the shark diving operations there. 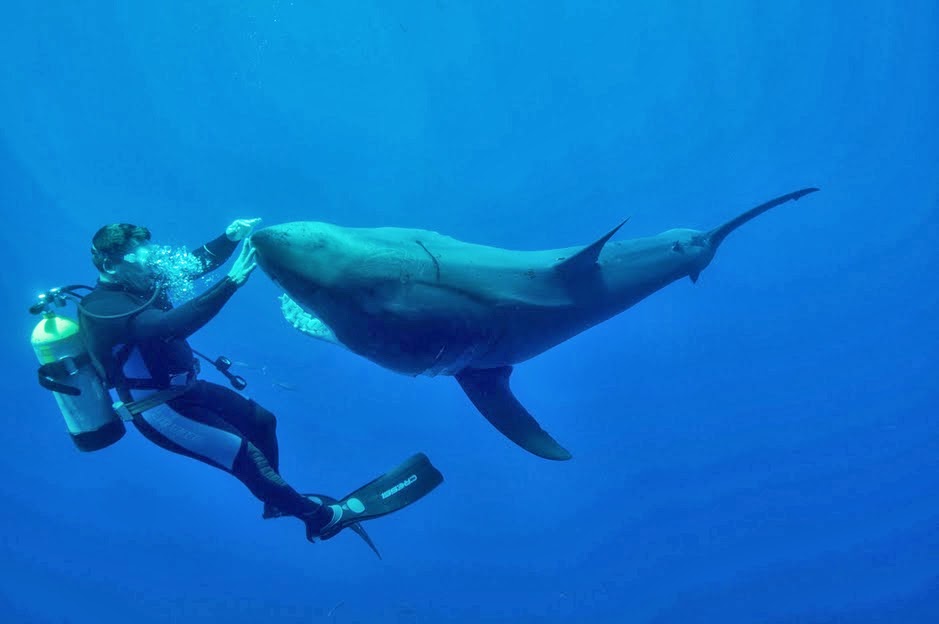 "Hello Martin, I am the owner of those images and I was very surprised to see them on the blog article you posted. I would like to ask you to immediatly remove them from the web as well as the comments that concerns them- which dont correspond to the reality in that specific situation. The person who is facing the shark had to push the shark away as it was a very intrusive personality and he touched it as little as he could and the dive was aborted immediatly. I don't want the images to be used in a provocative way when they don't reflect the reality of what happened. And I especially don't condone or encourage physical contacts with sharks, but in this specific instance, it could not be avoided by the diver- as I said, he got out of the water right away after the occurence. I am looking forward to hearing from you soon, Thank you, Jean-Marie Ghislain"

So after removing the "offending" pictures and publishing his response here, he is now featured in this article on the "Telegraph"

Jean Marie Ghislain is quoted as saying. “One day in Guadalupe [an island off Baja California in Mexico] three of us were swimming with two great whites. One was a young macho who just wanted us out of the water. But there was this huge, five-metre female who was the coolest shark I’ve ever met. She played with us for one and a half hours and she wanted the contact - she was free to move wherever she wanted, but she clearly wanted company.”

When I said they were not having shark conservation on their minds, while they did this out of cage diving, but rather did this for a "look at me" publicity stunt, Ghislain was outraged and asked me to remove that comment immediately. He said that it didn't correspond to the reality of that specific situation and that they left the water immediately when the shark got too "intrusive". Now Ghislain has the guts to publish the comment above.

Turns out that the article is not really about conquering the fear of sharks, but rather a promotion for his book "shark: fear and beauty". Again, no self interest involved here at all! "sharkcasm" intended.

About Shark Diver. As a global leader in commercial shark diving and conservation initiatives Shark Diver has spent the past decade engaged for sharks around the world. Our blog highlights all aspects of both of these dynamic and shifting worlds. You can reach us directly at staff@sharkdiver.com.
great white sharkisla guadalupeShark diving
23
Oct 2014
By Shark Diverillegal shark diving, Jean-Marie Ghislain liar, out of cage shark diving, swimming with sharks, UncategorizedComments Off on How to conquer fear of sharks? Break the law?