How many Great White Sharks are at Guadalupe Island?

Have a Sharky New Year!
Do we need a shark cull at Reunion Island?

The last 2 seasons at Guadalupe Island were awesome with more sharks than we have ever seen before. On some of our expeditions we saw over 30 individual sharks. Some of those sharks were old "friends", while a lot of them were new. We started the 2015 season with 170 identified great white sharks and ended with 200. That was one of the largest number of new sharks we encountered, since we started cage diving in 2001. 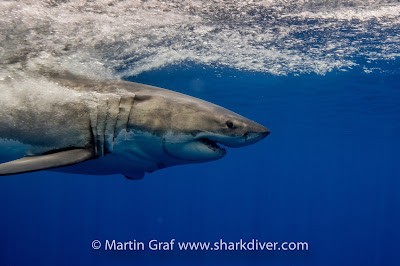 We are still working on a final count for the just finished 2016 season, but we definitely have more than 20 new individuals to add. The last couple of seasons were not only very productive as far as the total number of sharks seen (both new and already identified), but it was also unusual that we saw a lot of juvenile females early in the season and generally a much larger number of sharks late in the season. In seasons past, we saw the really big females in October and November and when they showed up, the smaller sharks stayed away.  The last 2 seasons the smaller sharks stayed around, when the big females arrived. What will we see this coming season? We never know what to expect when going to Guadalupe Island, but after 16 seasons of diving with these sharks, I can't wait to go back in August. 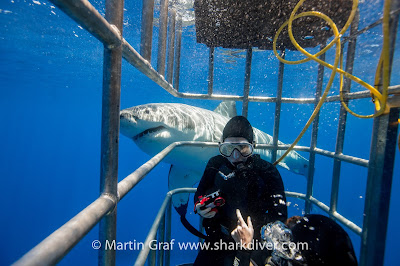 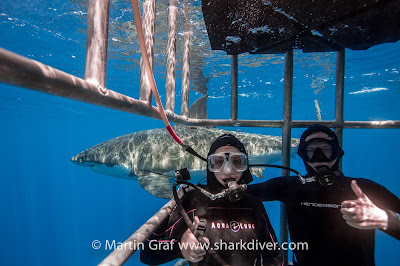 This last season was extremely unique in that we saw all sizes of sharks together. Anything from a small 8ft. male to Tzitzimitl and Scarboard, two of the largest females at Guadalupe Island. 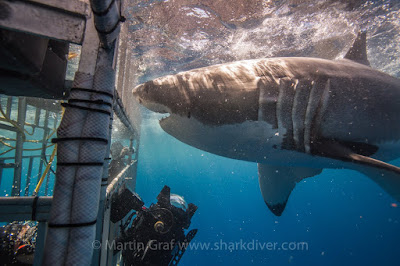 Why are we seeing these sharks in larger numbers? Are the conservation efforts paying off? I don't really have an answer to this, but hope that the continued efforts of the Marine Conservation Science Institute, (MCSI) with their tagging and photo ID program will provide the answers we are looking for. 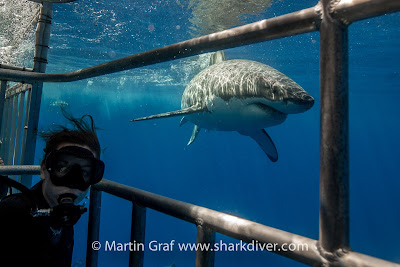 If you would like to support the ongoing research, MCSI has various ways you can become involved, including the right to name a shark. Wouldn't it be cool, if you watch shark week and see a shark you named? You can contact them by clicking here.

We also have 3 science expeditions to Guadalupe Island, with Nicole Nasby-Lucas from MCSI. These expeditions are a great opportunity to learn from the scientist who is maintaining the photo ID database. You also get a copy of that database, so you can identify all the sharks you'll encounter on the trip, as well as the sharks you see on shark week.

About Shark Diver. As a global leader in commercial shark diving and conservation initiatives Shark Diver has spent the past decade engaged for sharks around the world. Our blog highlights all aspects of both of these dynamic and shifting worlds. You can reach us directly at staff@sharkdiver.com.
24
Jan 2017
By Shark DiverUncategorizedComments Off on How many Great White Sharks are at Guadalupe Island?