“Aggressive” shark closes San Diego Beach
Talking about Sharks, Feeds the Frenzy
We just finished another awesome expedition to Guadalupe Island. After 14 years of diving there, it never ceases to amaze me, that we keep encountering new things. We had a pleasant trip down to the Island, with mostly calm waters and were accompanied by a pod of pilot whales that stayed with us for a while. 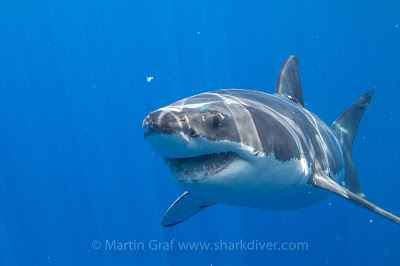 On our first day of diving, we had "Herman", a good sized adult male white shark, swim by our cages, just as 2 adult bottle nose dolphins and their baby showed up. As soon as he saw them, he took off like a top fuel race car at the 1/4 mile track. Score one for the dolphins! (unfortunately we don't have any pictures of this)

At the end of our second day, the local researchers came by with a "sea monster" they found floating on the surface. I had no idea that these things existed in our waters. Anyone knows what species this is?


We encountered a total of 16 different sharks on our trip and some, like "Legend" and "Herman", really put on a show, swimming by the cages and looking our divers straight into the eyes. Another sea turtle checked out our divers and showed us that they are not afraid to swim with great white sharks. 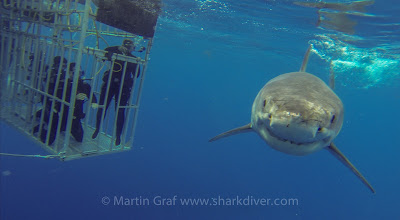 The trip home was again flat calm, a fact that was greatly appreciated by our diver. We are leaving again in a few hours for another exciting expedition to Guadalupe Island. What will we be seeing this time?


About Shark Diver. As a global leader in commercial shark diving and conservation initiatives Shark Diver has spent the past decade engaged for sharks around the world. Our blog highlights all aspects of both of these dynamic and shifting worlds. You can reach us directly at staff@sharkdiver.com.
cage divingguadalupe islandShark diving
04
Sep 2015
By Shark Divershark adventure, shark expedition, swimming with sharks, UncategorizedComments Off on Great White Sharks, Dolphins and a “Sea Monster”