Get to know “Lucy” Great White Shark at Guadalupe Island

I love "Lucy", and I'm not referring to the popular TV show in the 50ies. "Lucy" is a large female Great White Shark, that is regularly visiting Guadalupe Island. Most mature females are only seen every other year. They mate at Guadalupe Island and then stay away from the Island until after they give birth off the coast of Baja and in the Sea of Cortes, about 18 months after they get pregnant at Guadalupe. 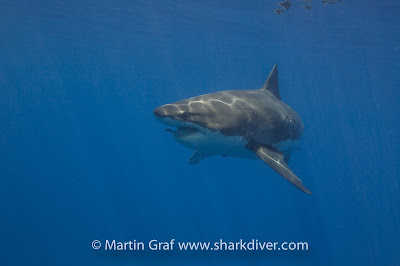 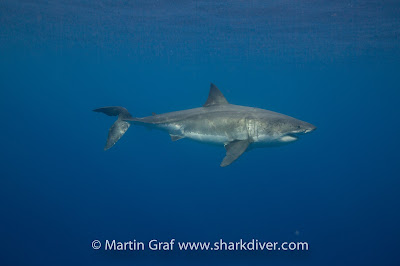 "Lucy's" tail makes it very easy to identify her. Usually we identify the individual sharks by their coloration. The transition from the white underbelly to the grey top is unique for every individual. Some people try to identify the sharks by their scars. That is how "Bite Face" got his name. The problem with scars is that they heal and if that is the only identifying characteristic you have, you would not recognize that same shark when it comes back the following year. Mutilations, like Lucy's tail don't change and can be used in conjunction with the markings to identify her. We have a photo id database that is managed by Nicole Nasby-Lucas from the Marince Conservation Science Institute, with over 220 individual sharks in identified.

If you are coming out on one of our "science" expeditions, you'll get a chance to learn how to identify these sharks from Nicole herself. You will also get the complete photo ID database, so you can identify all the sharks you encountered and what's really cool, you will then be able to identify the sharks you see on TV. How awesome will it be, when you see a shark on TV and realize that this is the individual that swam inches from your face at Guadalupe? 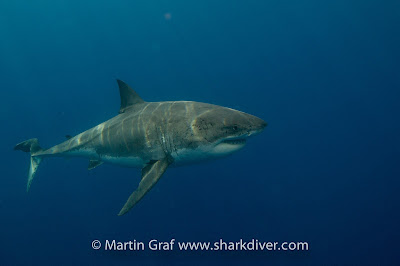 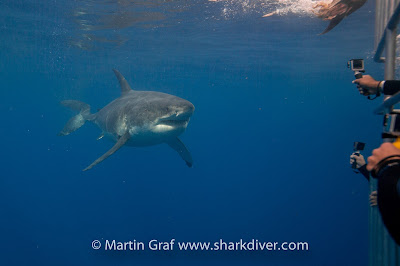 Even with her tail slowing her down, she seems to be healthy in every other way. She is definitely getting enough food and is holding her own among all the sharks at the Island. Lucy is a very curious shark and she swims very close to the cages, making eye contact with our divers as she is gliding by slowly. 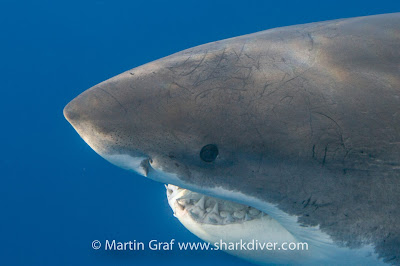 I hope to see Lucy when we return in the fall. I do have mixed emotions though. While I would love to see her, it would of course mean that she didn't get pregnant again last season.

If you would like to join us, or just get more information, call 619.887.4275, email crew@sharkdiver.com or visit our website www.sharkdiver.com

About Shark Diver. As a global leader in commercial shark diving and conservation initiatives Shark Diver has spent the past decade engaged for sharks around the world. Our blog highlights all aspects of both of these dynamic and shifting worlds. You can reach us directly at staff@sharkdiver.com.
awesomecage divingconservationgreat white sharkguadalupe islandoceansharkshark attackshark diverShark divingsharks
10
Jun 2017
By Shark Divercagediving, swimming with sharksComments Off on Get to know “Lucy” Great White Shark at Guadalupe Island