Do sharks get cancer?

Home / Blog about diving with Great White Sharks at Guadalupe Island and Ocean conservation, by Shark Diver. / shark cartilage / Do sharks get cancer?

Island Of The White Sharks
Support shark conservation at Guadalupe Island
One of the reasons millions of sharks get killed each year is the popular belief  that sharks don't get tumors, or cancer. That, along with the demand for shark fins, are the major reasons sharks get slaughtered. The belief that sharks don't get cancer has led to a big demand for their cartilage, which is supposed to prevent, or cure cancer. Now I'm not a scientist, but it seems to me, that even if sharks were immune to cancer, eating their cartilage would not make me immune to it as well, just like eating a fish doesn't give me the ability to breathe underwater.

But are sharks really immune to tumors or cancer? Well, since I'm not a scientist, I'm not sure about the cancer part, but I can definitively say that sharks do get tumors. Take "Meli" for example. He's a great white shark who regularly visits Guadalupe Island. Last year we first spotted him with a big growth on his left side and it is still there a year later. These pictures were taken just a couple of weeks ago and show his big tumor. 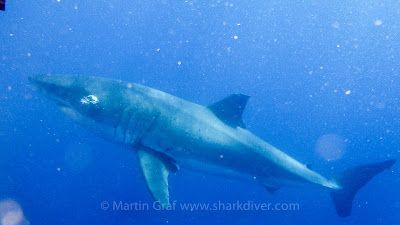 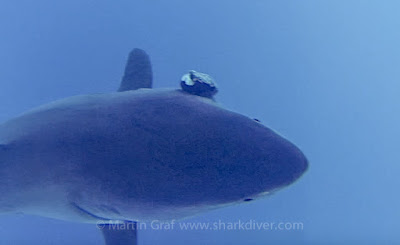 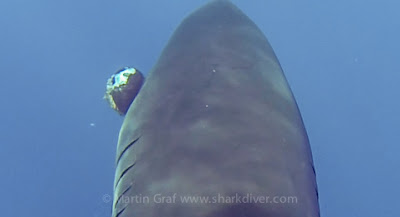 So, if you are taking shark cartilage supplements to prevent cancer, you might want to save your money and in the process, you just might save a shark.

About Shark Diver. As a global leader in commercial shark diving and conservation initiatives Shark Diver has spent the past decade engaged for sharks around the world. Our blog highlights all aspects of both of these dynamic and shifting worlds. You can reach us directly at staff@sharkdiver.com.
great white sharkguadalupe islandshark conservation
24
Nov 2015
By Shark Divershark cartilage, shark don't get cancer, UncategorizedComments Off on Do sharks get cancer?