Coming face to face with a great white shark. A spiritual experience?

Here is a letter from Jen Saunders, one of our divers, describing her experience.

A Shark Story: The Day I Saw God (He Healed Me)
As the only agnostic member from a devout Protestant household, I was always the black sheep at family reunions and was probably prayed for by aunts, uncles and grandparents more than anyone else in the Saunders clan. I just never bought into the whole Ã¢â‚¬Å“God thingÃ¢â‚¬Â, but always maintained the highest respect for all walks of faith and those who follow various teachings. 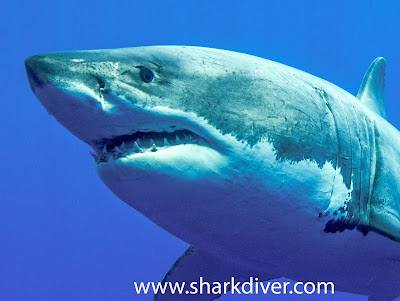 The year before my father passed away from pancreatic cancer we had a conversation about faith and God. My father, a retired professor of English literature, asked how I could feel complete without knowing and feeling the presence of a higher power. I simply replied by stating that his question was equivalent to one asking how I can sleep at night without having ever seen a space alien. My dad was unwavering in his notion that the little pit of emptiness I had always felt in the back of my soul stemmed from my disassociation with a spiritual deity, but it wasnÃ¢â‚¬â„¢t until I journeyed to Isle de Guadalupe and gazed into the eyes of an 18 foot great white shark named Thor that this emptiness was filled with an awe for a god that had been absent all my life.
As an avid scuba diver and lover of marine life, I had read various books on the great white shark. These creatures are pure perfection of evolutionary art. They boast six thousand pounds of muscle, are the only animal that devours its weaker siblings in the womb, is immune to cancer and is constantly awake. While navigating south from San Diego on the two-day boat ride, I thought about these facts and asked myself if there was a single creature higher than the great white so designed to live forever.
Before I open the pages into the details of my spiritual awakening, permit me to set the stage: Upon entering the cage it only took about 10 minutes before the first shark appeared. It circled the cage carefully studying each diver. In the movie Ã¢â‚¬ËœJawsÃ¢â‚¬â„¢ the rugged shark hunter Quint states that great whites have Ã¢â‚¬Å“lifeless eyes, black eyes, like a dollÃ¢â‚¬â„¢s eyesÃ¢â‚¬Â, but this couldnÃ¢â‚¬â„¢t be further from the truth. Great whites have a variety of eye colors that include blue and brown. Additionally, each shark made eye contact with every single diver. Later that day a great white named Thor made eye contact with me. I donÃ¢â‚¬â„¢t know if sharks can sense emotions in humans or if our heart rates serve as a language they can understand. I stared into ThorÃ¢â‚¬â„¢s eyes and felt a calming wave of warmth wash across the face of my soul. I looked into his intelligent eyes with awe and total respect, as a misunderstood creature, and marveled at his powerful mass. Just then he moved in and slowly approached the cage while never breaking eye contact with me. Then, two feet from the cage bars, he broke his path and headed to the right of the cage. Before he vanished into the blue, he swerved to the side and met my gaze once more, as if he was saying Ã¢â‚¬Å“farewell for now fellow soulÃ¢â‚¬Â. 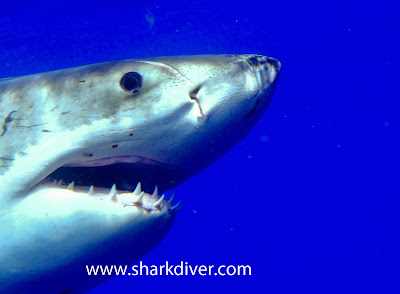 We shared a moment. I was sure of this. As a well-travelled individual who has lived and seen enough to fill 10 lifetimes, never had I witnessed something so spiritually moving. I felt the presence of a divine being within this shark. This powerful, sensitive creature that never sleeps imprinted his soul into mine.
Two months later I can happily report that the emptiness I once felt has been filled. Perhaps my father was right; it may be that my soul simply needed to be filled with the spirit or energy of something ethereal and divine.
Going face-to-face with a great white shark isnÃ¢â‚¬â„¢t just reserved for the thrill-seeker or the curious. This is an excursion I would recommend to anyone who feels a void deep within their being, or someone who is suffering from any number of personal or health issues. The great white shark is a healer; he is the misunderstood shaman of the sea.
Coming face to face with a Great White Shark can mean a lot of things to different individuals. What is universal is the fact that you will never forget the first time a Great White Shark looked you straight into the eyes.
Let's go shark diving!
Cheers,
Martin Graf
CEO
Shark Diver
About Shark Diver. As a global leader in commercial shark diving and conservation initiatives Shark Diver has spent the past decade engaged for sharks around the world. Our blog highlights all aspects of both of these dynamic and shifting worlds. You can reach us directly at staff@sharkdiver.com
cage divingeco tourismisla guadalupemartin grafshark conservationShark divingshark scienceshark week
04
Nov 2013
By Shark Divershark healing, UncategorizedComments Off on Coming face to face with a great white shark. A spiritual experience?