Biggest White Shark ever filmed?
Are the sharks going to be safe at Guadalupe Island?
The Discovery Channel promised us a better quality of programming for "Shark Week" this season, so I was curious to see what they would offer. One of their episodes was titled "Island of the Mega Shark". So who, or what, is that mega shark? 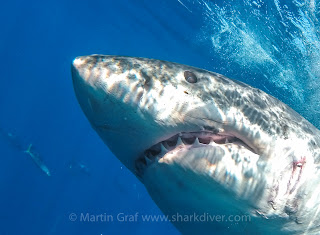 When that "Mega Shark" swims under the cage Dickie Chivell exclaims that "this is the biggest shark I've ever seen in my life" and "you have to make up a new word for how big this shark is."

Well Dickie, we have a word for that "Mega Shark". We call her "Lucy". She is easily identified by her mangled tail and is certainly a big shark, but more in the 17 ft range and definitely not over 20 ft. If this is the biggest shark you have ever seen in your life, you should really spend some more time at Guadalupe Island and see the really big sharks.


Imagine my surprise (sharkasm intended) when, a little later in the clip, I found out that this "Mega Shark" is actually more than one shark. The second shark is "Tail Scratch", again a large shark, but hardly 20 ft. When she was measured in 2009, she was 15 ft, which would make her between 16 and 17 ft. now. She is not even close to being the biggest shark that we regularly see at Guadalupe Island. The Marine Conservation Science Institute has a photo ID database that catalogs every shark that we have seen at Guadalupe Island in the past 15 years. 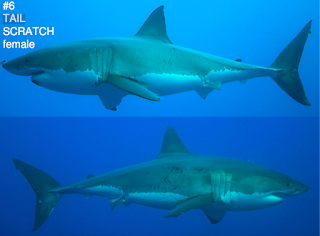 When you look at the pelvic fin area, you can clearly identify her. As you can see from the pictures below, it is the same shark.


Watch the video below from youtube. It shows the typical Jeff Kurr, and ABC4 stuff. If you want us to actually believe that there is a mega shark at Guadalupe Island, at least improve your editing a little so it is not painfully obvious that you are showing more than one shark.


ABC4, Jeff Kurr and Dickie Chivell, your failure to consult with a real expert, like maybe Nicole Nasby  Lucas, who could tell you all about the known sharks at Guadalupe and your inability to identify an individual shark, even when one has a completely mangled tail, clearly shows what kind of "experts" you are when it comes to great white sharks.

For anyone interested in identifying the great white sharks at Guadalupe Island, you can buy the photo ID book here. It is a great resource for anyone watching "Shark Week" or who's going to Guadalupe Island. Shark Diver is proud to support Nicole's research and has her hosting our special science expeditions to Guadalupe Island each year.

Let's go shark diving and experience these magnificent animals up close and personal. See for yourself awesome these sharks are in real life.

About Shark Diver. As a global leader in commercial shark diving and conservation initiatives Shark Diver has spent the past decade engaged for sharks around the world. Our blog highlights all aspects of both of these dynamic and shifting worlds. You can reach us directly at staff@sharkdiver.com.
guadalupe islandShark divingshark week
17
Jul 2015
By Shark Diverbiggest shark, mega shark, swimming with sharks, UncategorizedComments Off on Biggest White Shark ever filmed?