30 White Sharks and a pod of Orcas

Home / Blog about diving with Great White Sharks at Guadalupe Island and Ocean conservation, by Shark Diver. / shark encounter / 30 White Sharks and a pod of Orcas

Great White Sharks, Mauricio Hoyos and Ocean Ramsey at Guadalupe Island
“Aggressive” shark closes San Diego Beach
What an incredible expedition! We not only saw a record 30 different individual white sharks on this expedition, on our way back we ran into a pod of Orcas that came right up to our vessel. The pod included a whale with an incredibly tall dorsal fin, as well as some mothers with their babies. What a treat! 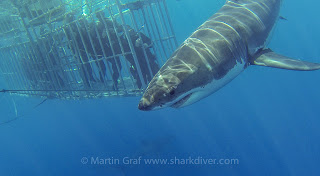 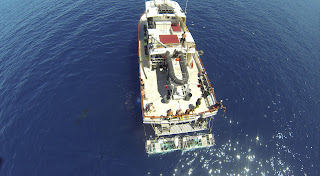 In addition to the sharks we encountered earlier this season, we had 3 new females, 3 new males, along with Keli, Andy, Johnny and Herman, all sharks we know from previous seasons.


If you aren't among the lucky ones that already booked an expedition this season, we only have a couple of spaces left on our August 30 and September 9 expeditions. Call Cindy at our office 619.887.4275 or email staff@sharkdiver.com to reserve your space. 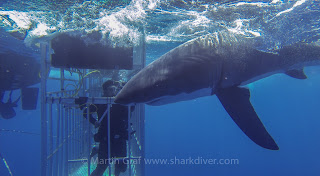 About Shark Diver. As a global leader in commercial shark diving and conservation initiatives Shark Diver has spent the past decade engaged for sharks around the world. Our blog highlights all aspects of both of these dynamic and shifting worlds. You can reach us directly at staff@sharkdiver.com.
cage divinggreat white sharkguadalupe islandorcaShark diving
24
Aug 2015
By Shark Divershark encounter, swimming with sharks, UncategorizedComments Off on 30 White Sharks and a pod of Orcas