Could the Manhattan Beach shark bite have been predicted?

Home / Blog about diving with Great White Sharks at Guadalupe Island and Ocean conservation, by Shark Diver. / illegal shark fishing / Could the Manhattan Beach shark bite have been predicted?

Illegal shark fishing causes injury to swimmer.
Who is going to be at Guadalupe?
The recent shark bite incident at Manhattan Beach Pier, made worldwide headlines. Just google "shark attack Manhattan Beach" and you get literally pages and pages of links with headlines screaming "Shark Attack". Weather.com used the picture below to catch their readers attention and wrote that A 7-foot-long great white shark attacked a swimmer off the CaliforniaÃ¢â‚¬â„¢s Manhattan Beach on Saturday, causing panic amongst crowds of people enjoying one of Southern California's most popular beaches on the 4th of July holiday weekend. Now a headline and picture like that would scare any sane reader and make them think twice about swimming in the ocean. Of course we know, that the shark didn't really attack the swimmer, but was trying to get away from a fisherman, who had him hooked on a line, instead. Was this just a freak accident, or could this have been predicted? Back in November of 2013, Pete Thomas wrote a piece for Grind TV about swimmers and fishermen harassing juvenile great white sharks at the exact location where this swimmer got bit. The article says: Ã¢â‚¬Å“White sharks are a candidate species under the California Endangered Species Act and therefore fully protected,Ã¢â‚¬Â Traci Larinto and Michelle Horeczko, part of the state Department of Fish and WildlifeÃ¢â‚¬â„¢s White Shark Status Review Team, explained in a statement. Ã¢â‚¬Å“They cannot be taken or pursued. The public should take steps to avoid white sharks while fishing or being out on the water.Ã¢â‚¬Â As to the legality of trying to catch great white sharks, it has this statement: Ã¢â‚¬Å“Right now, every surfer/thrill seeker with a GoPro is going out to Manhattan Beach and trying to film them, ride them, and catch them on hook and line,Ã¢â‚¬Â said Christopher Lowe, a Cal State Long Beach professor and white shark expert. Ã¢â‚¬Å“Most people do not understand CESA regulations and that even incidental catch [or] being caught swimming after a shark with a GoPro camera can be considered take or harassment and is a citable, even jailable offense.Ã¢â‚¬Â So it comes as hardly a surprise that there are juvenile great white sharks in the area and unfortunately, it seems that, despite the law protecting them, some fishermen are still purposely trying to catch them.  Ã¢â‚¬Å“One rumor is that a couple of fishermen have caught and killed some sharks off El Porto and supposedly found squid in the stomachs. I just donÃ¢â‚¬â„¢t think the public understands the ramifications of the law here.Ã¢â‚¬Â We have known for quite a while, that juvenile great white sharks are in the vicinity of Manhattan Beach and that fishermen, along with thrill seekers are harassing and trying to catch them. So it comes hardly as a surprise that something finally happened. Predictably though, the headlines don't say that illegal shark fishing was to blame, but instead scream "Shark attack!" It looks like the authorities have also realized that the fishing was the cause of this shark bite and reacted by banning all fishing from the pier, for the next 60 days. 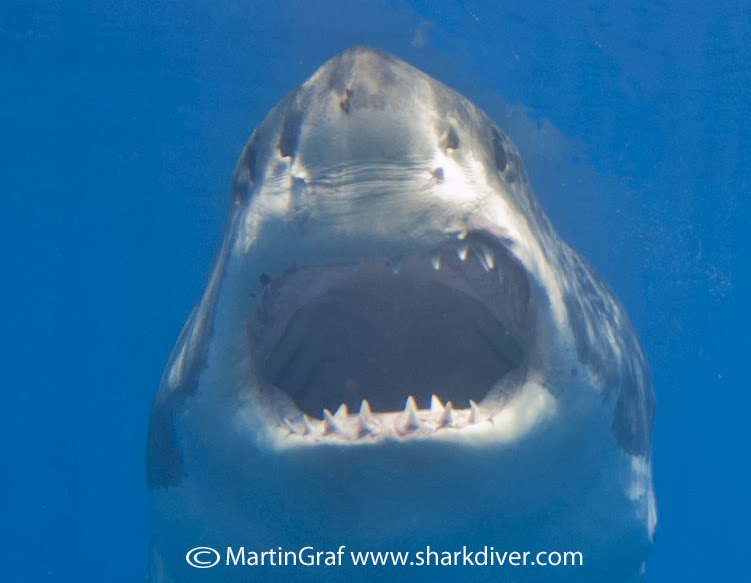 This situation reminds me of all the idiots going outside the cages at Isla Guadalupe, where sooner or later, something might happen as well.   If you want to legally and safely swim with tiger sharks, dive with great white shark, or come face to face bull sharks, give us a call at 619.987.4275 or send us an email at staff@sharkdiver.com. We specialize in "Safe and Sane" shark diving, always using cages when diving with great white sharks and only diving with sharks, where it is safe and legal to do so.  When done responsibly, swimming with these awesome creatures is truly an experience of a lifetime. After 14 years of diving with all kinds of sharks, I've come to love and respect them for what they are, highly efficient predators, that are neither mindless killers, nor harmless pets. Cheers, Martin Graf CEO Shark Diver   About Shark Diver. As a global leader in commercial shark diving and conservation initiatives Shark Diver has spent the past decade engaged for sharks around the world. Our blog highlights all aspects of both of these dynamic and shifting worlds. You can reach us directly at staff@sharkdiver.com.
bull sharkgreat white sharkspete thomasshark attackShark divingtiger shark
09
Jul 2014
By Shark Diverillegal shark fishing, swimming with shark, UncategorizedComments Off on Could the Manhattan Beach shark bite have been predicted?